Top quotes that made the news for BC3 this year!

“I had done something that nobody else in our family had done.”

- Ray D. Steffler, who in 1986 received an associate degree in business management from BC3 and became the first member of his family to graduate from college. Steffler has been a BC3 trustee since 1985, its board chairman since 1999, and helped to create the BC3 Alumni Association. He was honored as BC3 distinguished alumni in 2017.

“I am over the moon. Being a five-star chapter means we are among the best. It shows that we have commitment and follow-through, that we can start from scratch and continue to build our way up.”

“This accomplishment rings the bell of success loud and clear that can be heard across the state.”

- Kevin Boozel, a Butler County commissioner and 1991 BC3 graduate, on BC3 being selected as the No. 1 community college in Pennsylvania in back-to-back rankings by Schools.com.

“That you should have a meeting place as far away as you can get from your house. So you don’t get caught in the fire and you don’t get lost.”

- Sara, 8, a student at Portersville Christian School, on what she learned after attending a presentation inside BC3’s fire safety training trailer.

“I bought my first home at age 24. With no debt I could arrange to do so. Other students are getting out of school, maybe getting their first job, and they have to pay $600 or so out of the bank. My mortgage is less than they are paying on their student loans.”

- Benjamin Wilson, who attained an associate degree in measurement science-metrology technology from BC3 in 2006 and who works as a supervisor at a Reading company that manufactures optoelectronics for microchips used in computers, smartphones and nanotechnology.


“Awesome, awesome dessert. So far the best dessert that I have tried. I was telling everyone over at my table and we want the recipe. Now can we get the recipe?”

- Dan Beebe, BC3 assistant softball coach, describing the trajectory of BC3 outfielder Nicole Houk’s two grand slams in the third inning of a game against the Community College of Beaver County.

“They will work on their own schedule. These are workers who have a family, who are caregivers, who do not have the flexibility given their fixed work and personal commitments to accommodate a traditional schedule offering of courses. They don’t want to be blocked in, to be here at a certain time. This is the model they want.”

- Matt Kovac, BC3’s dean of STEM, in announcing  that BC3 will begin to offer credits in the Basic Manufacturing Workplace Certificate program online.

“You are getting the same education as you would anywhere else for an affordable price with great teachers.”

- Kacie Brandenburg, a BC3 student who transferred from Indiana University of Pennsylvania, in advocating for increased community college funding from Gov. Tom Wolf’s administration during Lobby Day in Harrisburg.

“Since we already have about 75 percent of our students graduating debt-free, this scholarship helps to increase the number of students graduating from BC3 @ Brockway without any student loan debt, ready to enter the workforce and able to contribute to our local communities.”

- Jill Martin Rend, director of BC3 @ Brockway, on the creation of the Frank Varischetti Freshman Scholarship.

“You’re definitely in good hands at BC3. They helped me go from someone who knew nothing about welding, who wasn’t even mechanically inclined, to becoming a certified welder building nuclear-powered warships for the United States Navy.”

“Now I can finally break a smile.”

- Anthony Lewis, of Butler, on becoming the first BC3 golfer to win the Western Pennsylvania Collegiate Conference individual championship.

“I wanted more in life and knew that I was not going to get anywhere if I stayed where I was. I may have struggled a lot, but I never quit.”

- Heather Morida, of New Castle, a single mother of a 6-year-old daughter and who participated in BC3’s KEYS program. Morida earned an associate degree in registered nursing, passed her National Council Licensure Examination for Registered Nurses and works as a nurse near Pittsburgh.

“‘This Little Light of Mine / I’m gonna let it shine.’ Every day my prayer is that can I be a light to somebody else. And I think this gift is something that is going to work in many peoples’ lives, this little light of mine.”

- Janice Phillips Larrick, of Butler Township, on her $1 million commitment to BC3’s registered nursing program in September. Larrick also committed $50,000 to the program in March.

“BC3 is more than just a community college. It’s a place where you meet people young and old. You learn from not only the teachers but from fellow classmates, and you make great friendships along the way.”

- Nicholas Briggs, of Saxonburg, who received four associate of applied science degrees from BC3 in May.

“It is a great start to my four-year bachelor’s at a fraction of the cost, and Job Corps essentially cut the entire cost of my bachelor’s in half because I’m getting the first two years essentially free.”

- Mason Scovil, of Mercer County, who participated in Job Corps and is a business administration major at BC3 @ LindenPointe in Hermitage. The federal program, offered at five BC3 locations, prepares students for higher education, provides financial and career assistance and enables many of its participants to graduate debt-free.

“Their system is so well organized. We do consider them the standard when it comes to apprenticeship and involvement and developing their employees.”

“This is a first and we are very grateful to BC3’s club coordinators and student members for making this happen. It speaks very highly to the quality of people at that institution.”

- Eric Frampton, Hermitage Police Department patrolman, on BC3 @ LindenPointe students creating “Dog Day Tuesdays” - a hot dog and snack sale - to raise funds for the police force to offset the $68,000 needed to create a K-9 unit.

"Professor Mack is the best teacher I have ever had. She is so helpful and really knows a lot about computers and the programs. She will stop to help you if you are having trouble with what she is teaching in class and will help you get to the step she is on at the time.”

“I work side-by-side with other nurses who went to other colleges. We have the exact same roles. We were getting the exact same amount (of pay). They were still paying school debt 10 years later and I was working alongside them, getting the same raises, the same opportunities, without the debt.”

- Julia Sudetic, who earned a registered nursing degree at BC3 in 2006 and is employed near Pittsburgh.

“The teachers were very engaging and encouraged success. Studying so many different subjects has also made me a more well-rounded person. I think that every class connects to the others. Recognizing and exploring these connections forced me to think in new and exciting ways.”

- Elizabeth Stack, a former ballerina and BC3 @ Cranberry student who received an associate degree in business administration.

“I want to go into neo-natal and work with babies. So I think it will help with the way I talk to parents.”

- Kaitlyn Turney, a BC3 registered nursing student and member of the BC3 Scholars Program, on the debut of the One-Button Studio in the Heaton Family Learning Commons, technology that provides opportunities to practice video presentations and online interviews that give future job seekers an edge.

“That is one of the things that I think is a blessing about the community college and for students who come to school at the college. They are being taught by people who are experts in their field, in small classes. When they see you in the student union or out and about, these professors know you by your first name.”

- Joseph E. Kubit, a Butler attorney, BC3 graduate and vice-chair of the BC3 Board of Trustees, who addressed hundreds of students, faculty, administrators and lawmakers as a featured speaker at Lobby Dayat the state Capitol.

“Very often I talk about the significance of each of us going above and beyond. And frankly, to a person, this hall is filled with individuals who go above and beyond every day.”

The BC3 nursing club “getting involved helps those of us in the trenches to make a difference between life and death in our community.”

- Billie Brink, a team leader with Seeds of Hope, on the BC3 Nursing Club’s yearlong effort to distribute literature identifying regional treatment options available to those suffering from opioid addiction.

“That is why I came to BC3. The first thing I wanted was to improve my English, and I wanted to earn a degree in the medical field.”

“I am really impressed that the local community college folks have been able to come together to give us this.”

- Mike Blessel, a board member of the Westcentral Pennsylvania chapter of the American Red Cross, after receiving $3,600 from the BC3 Nursing, and Physical Therapy Assistant, clubs to help victims of the 2017 hurricane season.

“Whenever I look back on those times, there is one quote that I think fits perfectly for my two years at BC3. ‘Enjoy the little things in life because one day you’ll look back and realize those were the big things.’”

- Missy (Haney) Schnur, a Laurel High School graduate and BC3 volleyball All-American who was inducted into the Charles W. Dunaway Pioneer Hall of Fame.

“I dream of one day using my degree to help others that have fallen into hard times, and give them the resources needed to get out of the pitfalls of poverty. I want my boys to see their mother succeed at school and I want them to know that we can do anything we put our minds to do.”

- Amber Self, 31, of Butler, a single mother of three boys and a social work major at BC3. Self was the first incoming BC3 student to utilize a reverse referral form distributed by the state Department of Human Services that expedited a decision on her eligibility to participate in the KEYS program at BC3.

“He chose BC3 because of the cost. And it is close to home. And he is very excited because when he was talking to his friends at the end of the school year, they were all talking school loans. And what they had to buy. And he said he could go for two years to BC3 and graduate debt-free.”

- Carol Hazlett, a Butler County American Legion Riders’ participant, on her son, Timothy, a BC3 computer information systems student. The ride supports the group’s mission of reaching a $10,000 endowment level for BC3 student-veterans with the BC3 Education Foundation, Inc. 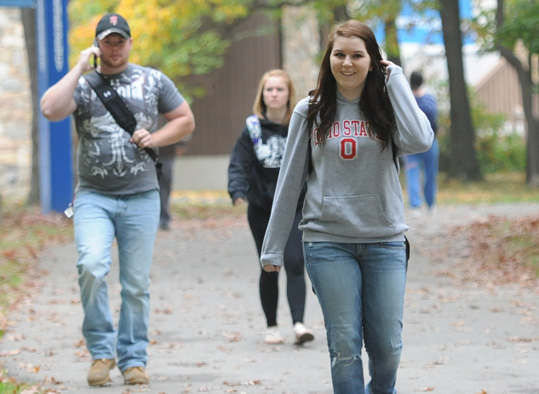 Make an Appointment with BC3 Admissions using Calendly